Birmingham Bowl: Texas Tech Red Raiders vs. South Florida Bulls
Line: Opened USF -3, now USF -2.5
The Bulls are one of the biggest consensus picks of the college football postseason, drawing more than 65 percent of total tickets written for this December 23 bowl game. But despite that one-sided count, the line is swaying toward the Red Raiders, falling from the key number of a field goal to South Florida -2.5. 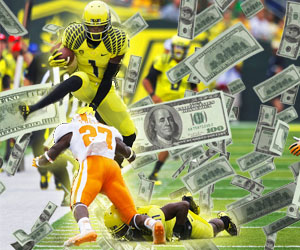