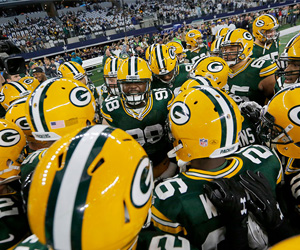 The NFL is the king of sports betting and proves that every offseason by dominating the headlines – and the sportsbooks – with props and futures hitting the board every week.

One of the most anticipated markets each spring is the NFL season win totals, which have been dominated by sharp players to the point that some bookies pass on offering them – especially this early into the offseason. But, if you love to bet the NFL (and you do), here are some early season win total sports bet picks for the 2018 NFL season.

The Packers showed just how thin they really are when quarterback Aaron Rodgers went down with a broken collarbone in 2017. The defense couldn’t keep Green Bay in games, and the offense was terrible with no running attack and standouts like WR Jordy Nelson fading without Rodgers under center. The Cheeseheads find themselves as NFC North underdogs for the first time in a long time, with the Vikings now the team to beat. The Lions have a new head coach breathing life into their defense and the Bears are also under new direction and showing promise with some younger talent on the rise. Rodgers may only be able to piggy back this team so far in 2018.

The Niners were one of the best teams to close the 2017 season, winning their final five games of the schedule. That would get San Francisco half way to topping this win total in 2018. The 49ers threw the check book at quarterback Jimmy Garoppolo, banking on him to continue his success since being traded to San Francisco midway through last season. Kyle Shanahan is an offensive wizard and there is a draw to play in the Bay Area now, which may mean some good free agent signings. The NFC West is changing, and the Rams and Niners look to be the future of the division.

The Cowboys’ 2017 season was a weird one. Dallas played the majority of the year with the shadow of Ezekiel Elliott’s suspension hanging over them, and when the running back was finally sidelined by the NFL the team was downright terrible.

The defense continues to overperform given the talent on the depth chart and some key free agents could be bailing on Big D for big money elsewhere. The passing game has some serious question marks and that means defenses may just load up the box to stop Zeke. On top of that, the NFC East is going to be very competitive – not just with the Super Bowl champion Eagles in the fold –  with the Redskins making moves and the Giants getting healthy.

The Texans barely got a glimpse of their potential last season due to injuries to key players on both sides of the ball. But, if you paid attention, you saw the future of Houston’s franchise in rookie QB DeShaun Watson, who wowed in limited action before blowing out his knee. Houston will continue to build around Watson with signings and draft picks, setting this team up for future success.

The AFC South could be extremely competitive – or it could be very weak – pending on Andrew Luck’s shoulder in Indianapolis and the new-look staff for the Titans in Tennessee. Looking at the divisional rivals and their win totals for 2018, it’s really a two-horse race between the Jaguars and Texans. Jacksonville beat the Texans twice in 2017 by a combined score of 74-14, but Tom Savage and T.J. Yates were the starting QBs for those occasions.