How to wager on the NFL Wild Card Weekend betting odds 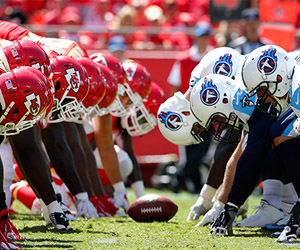 The NFL Wild Card matchups are set after 17 weeks of football. Here’s one of our sports handicapping articles which takes a quick look at these games, the NFL betting odds, and the betting angles you need to know before placing your wagers on the Wild Card games.
Tennessee Titans at Kansas City Chiefs (-7.5, 44.5)
The Chiefs closed the season much like they started it. Kansas City, which opened 5-0, finished on a four-game winning streak and earned home field for the Wild Card Round. That’s huge in this matchup with Tennessee. Not only is Arrowhead Stadium one of the toughest venues on visitors in the NFL but the Titans have decisively struggled away from Nashville this season.
Tennessee won only three games on the road, with two of those coming at Cleveland and Indianapolis. The Titans score only 17.5 points per road game while allowing 23.9 points against as visitors. The Chiefs allow just 16.9 points per home stand and have scored an average of 28 points over that four-game winning run.
Atlanta Falcons at Los Angeles Rams (-6, 48.5)
The Rams were able to rest their key players in Week 17, which could be good or bad for such a young squad. Los Angeles hasn’t played on a stage this big since the early 2000’s and face a playoff savvy Falcons team that battled its way into the postseason with a 3-1 record in its last four outings of the regular season.
Atlanta may not have the offensive chops to go tit-for-tat with the Rams’ potent scoring attack, however, its defense has been the difference maker down the stretch. The Falcons have given up only 17 points per game in their last five showings and have played Under the total in each of those contests. With the inexperienced Rams a little jittery, there could be value in playing the Under 48.5 points Saturday.
Buffalo Bills at Jacksonville Jaguars (-7.5, 40)
The Bills face two major questions in this Wild Card matchup: Can LeSean McCoy come back from an ankle injury for Sunday and can Buffalo protect quarterback Tyrod Taylor from a vaunted Jaguars pass rush? McCoy is the Bills’ biggest home run hitter, able to do damage on the ground and through the air, and will be vital when Jacksonville brings pressure.
The Jaguars backed into the postseason with back-to-back losses, which doesn’t look good on this team making a rare postseason appearance. Jacksonville should be concerned with the stability of Blake Bortles under center, after the QB tossed five interceptions in his last two games. Buffalo was sixth in the league with 18 interceptions and was just behind the Jags in terms of giveaways/takeaways.
Carolina Panthers at New Orleans Saints (-6, 48.5)
The Saints already have two wins over the Panthers this season, knocking off Carolina 34-13 on the road in Week 3 and 31-21 at home in Week 13. In fact, New Orleans has covered the spread in six straight meetings with Cam Newton & Co. heading into Sunday’s Wild Card clash and has averaged 31 points over those half a dozen meetings. The Saints were 7-1 SU and 5-3 ATS inside the Superdome this season.
That said, Carolina has been a solid road team. The Panthers finished 5-3 SU and  ATS in the role of visitor this season but had a three-game winning run snapped at Atlanta in Week 17. Carolina’s offense runs hot and cold, with inconsistent efforts burning them in key spots. The Panthers will need its third-ranked pass rush to hurry Drew Brees if they want to stop the Saints from running away on the scoreboard, with the New Orleans QB picking apart the Panthers in the two encounters this season.