Take a swing at golf betting with this handicapping tips

Three things you should add to your MLB handicapping 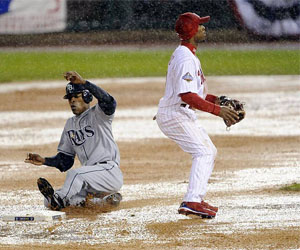 Baseball is a numbers game, so there’s no shortage of metrics and analytics out there for top handicappers and MLB bettors to sink their teeth into before making each bet.
But, among the columns and spreadsheets, you can sometimes get overwhelmed and overloaded, going blind to some very important handicapping tips and tactics that you may not have thought of. Here are three baseball betting practices you should add to your daily capping routine, if you aren’t doing these already:
Umpires
You spend all that time capping the starting pitchers, but not the guys who have the ultimate say on balls and strikes? Umpires have a huge impact on how a game is played out, particularly totals.
Some umps have a more liberal strike zone than others, allowing control pitchers to paint the corners and keep hitters guessing. Other umps squeeze the starter and force them to be pin-point accurate, which eventually leads to trouble. Finding pitchers that either cooperate or clash with the home plate umpire is one of the best ways to get a leg up on bookies through the baseball season.
Weather
We all know about the winds in Wrigley. Hell, books won’t post a total on a Cubs game until they know for certain which way that infamous Chicago wind is blowing. But as we progress into the summer, and the heat is turned up in June, July and August, game-time temperatures are worth a glance when making your MLB wagers.
First off, heat and humidity – especially in places like Arlington, Texas – allow the ball to carry further than in the spring. What would be a routine fly ball in the first two months of the schedule is testing the warning track and making it over the wall. Summer heat can quickly make the Over a hot play in those warmer climates with outdoor stadiums.
Second, that same heat can wear on pitchers. Take a look at the starter, how they throw, what they rely on, and – surprisingly – how big they are. Slender pitchers do tend to fatigue faster during hot days while some of the beefier hurlers have some extra fuel in the tank for those outings. You may get an extra inning out of a heftier hurler.
Lineups
Most days, a major league manager is going to march out the same lineup as the night before – with some minor tweaks here and there. To casual fans, this shouldn’t make much of a difference. However, with the way oddsmakers factor these MLB moneylines, there is value in recognizing the best and worst lineup combinations.
You’re not going to beat the bookie by simply studying up on the starters – the equations are just too good. The margin for error comes in the lineup, which is announced in the hours before the first pitch. Overnight odds usually hit the board in the early evening for the next day, so keep a close eye on any rumblings from the clubhouse and follow those beat reporters on Twitter, as they’ll routinely send out the lineups each day.
Paying attention to who’s in and who’s out, current form, and the most productive batting orders – as well as how that lineup performs against the opposing pitcher – is where you can find value. MLB odds are so sharp and drum tight at this point in the season, you really have to scratch and claw to get the best of the books.