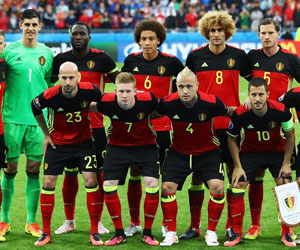 The 2018 World Cup will be the biggest betting event on the planet when the tournament kicks off in Russia on June 14. The usual soccer powers are at the top of the futures board, with nations like Germany, Argentina, Spain and Brazil pegged as the favorites, however there is great value looking down the World Cup sports bet odds and finding a sleeper team that could stun the soccer world this summer.
If you’re betting on the World Cup, here are some live long shots to consider in the outright winner odds and during group play.
Belgium (+1,100)
All the buzz heading into the tournament includes Belgium as the sexy sleeper pick to win the World Cup – or at least advance deep into the knockout phase. Belgium could be one of the top two-way teams in the tournament, with a history of being a stout defensive club but also boasting some of the top goal scorers in the world.
During qualifying, the Belgians topped Group H with a 9-1-0 record and scored a whopping 43 goals for while allowing just six goals against. Manchester United superstar Romelu Lukaku is the team’s top threat, having netted 11 goals during the European qualifiers, and the mid-field combo of Eden Hazard and Kevin De Bruyne is the beating heart of this side.
Belgium is saddled in Group G along with Panama, Tunisia and England, and is the heavy favorite to top the group and advance into the Round of 16. From there, they could face Poland or Columbia in the opening knockout stage, with a good shot of facing Brazil in the quarters. An upset there would flip the World Cup odds on their ear.
Poland (+4,000)
Poland possess perhaps the most dangerous striker in the tournament: Robert Lewandowski. The Bayern Munich standout scored 16 goals in European qualifiers – tops in Europe – and comes off a huge season with the German pro club. Poland dominated Group E in qualifying, with an 8-1-1 record along with 28 goals for and 14 against. The lone loss came at the hands of Denmark in a 4-0 blasting in September 2017.
The Polish are in Group H, with their biggest threat being Columbia. Japan and Senegal round out the group. If Poland can top the table, they would likely find Belgium or England waiting in the Round of 16, and a win there could set up a possible meeting with reigning World Cup winners Germany in the quarterfinals. Poland has defeated Germany just once in their head-to-head history.
Egypt (+15,000)
As far as African nations go, Egypt is the top option at monster odds to win the World Cup. But there’s a lot of like about this squad heading into the tournament and while they may not make it all the way to the final, they could throw a wrench in the plans of some power nations before everything is said and done. Egypt is a strong defensive club – like most African and Middle East countries – but has an elite-level scorer in Liverpool superstar Mohamed Salah. He scored nearly half the team’s goals in qualifying, so while he’s incredible – and coming off a stellar Champions League campaign – Egypt is very dependent on Salah creating chances.
The Pharaohs are well managed and find themselves along with host Russia in Group A, including the likes of Uruguay and Saudi Arabia. Uruguay is the favorite to top the group, and Russia will get all the help it needs to advance to the knockout phase but Egypt has upset potential here. Should it at least finish second in the table, that would set up a date with Spain or Portugal in the Round of 16 – the latter of which stole a 2-1 victory over Egypt in a friendly match back in March thanks to a pair of injury-time goals from Cristiano Ronaldo. So, we’ve seen this squad compete with soccer’s elite.