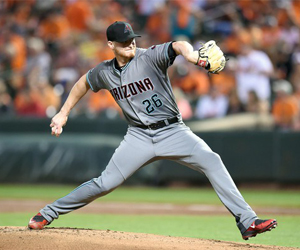 The MLB regular season comes to a close this weekend, so it’s a great time for the top handicappers to reflect and look back at some of the best and worst bets on the bases during 2017, sizing up moneyline, runline, and Over/Under returns from the past six months of baseball betting.
Best moneyline bet
Arizona Diamondbacks (+18.08 units)
In a division run by the Los Angeles Dodgers, the Diamondbacks were supposed to stay near the middle of the pack. However, Arizona started strong and stayed consistent for most of the summer, even taking it to the Dodgers for an 11-8 head-to-head record – many of those games presenting plenty of plus-money value. The D-backs got a Cy Young-quality year from ace Zack Greinke and a MVP effort from Paul Goldschmidt, putting Arizona well ahead in the National League Wild Card race. This is one team the top contenders do not want to face in October, especially Los Angeles.
Worst moneyline bet
San Francisco Giants (-38.78 units)
Staying in the National West, the Giants were the biggest money pit of the 2017 MLB season. And you can’t really blame them. When your division features the Dodgers, Diamondbacks, and Rockies – all of which look to be headed for the postseason – you don’t get much of a break, having to play those clubs every week. San Francisco’s usually stable pitching staff was horrendous, boasting a 4.54 ERA, and it didn’t help that the Giants offense continued to be an issue, plating only 3.92 runs per game – dead last in the majors. San Francisco was especially rotten away from home, going just 26-55 on the road for a loss of -27.62 units.
Best runline bet
Houston Astros (85-74 ATS, +22.70 units)
The Astros exploded out of the gates and not only stacked major cash with their moneyline success but also on the runline – baseball’s version of the pointspread. Houston was a -1.5 favorite in most of its outings, which means sizable plus-money returns when they did win by two or more runs. The Astros’ lethal combo of steady pitching – 4.13 ERA (11th) – and a powerful offense – ranked No. 1 in the big with 5.57 runs per game – made quick work of the runline and gave baseball bettors just another way to cash in on the biggest surprise of the 2017 season.
Worst runline bet
San Francisco Giants (69-90 ATS, -27.12 units)
It seems like the Giants were a terrible bet no matter how you wagered on them. Because San Francisco was so weak, they would have been getting +1.5 runs on the runline, making them a costly wager with bettors have to fork over the juice. The Giants played in just 45 one-run games this season and got pounded on the road, getting outscored by an average of 5.45-3.99 per away game – which is pretty much right on that 1.5-run spread.
Best Over bet
New York Mets (88-59-12 O/U)
The Mets were a mess this season, and a good part of that was a dismal pitching staff that boasted a collective 4.98 ERA – 29th in the bigs. New York issued 580 total base-on-balls, which quickly equated into runs scored. And when you throw in an offense that plates 4.57 runs per game, you get some busy scoreboards – and happy total bettors. The Mets were especially profitable for the Over on the road, where they went 47-26-5 O/U and saw an average of 10.64 combined runs scored in those away games.
Best Under bet
Pittsburgh Pirates (62-90-7 O/U)
The Bucs found themselves up against it in the National League Central. With the Cubs playing their way to the top of the division, and the Brewers and Cardinals fighting for a ticket to the Wild Card game, Pittsburgh was left in the dust, dealing with solid pitching staffs and plating only 4.10 runs an outing – 28th in the majors. The Pirates pitching staff was respectable, posting 4.22 ERA and the bullpen didn’t allow much in the late innings, with a 3.84 collective ERA that sits seventh in the major leagues. That keep scores down in the Steele City.