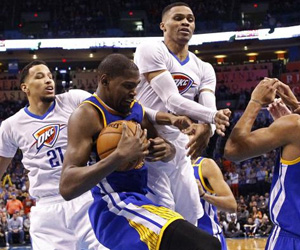 If you’ve been buried in football betting like the top handicappers since the fall, it’s time to come up for air and find another way to wager on sports. With the NFL season all over, the NBA steps up as the main attraction at the sportsbooks.
Should you have been sleeping, here’s a look at the NBA futures odds and where you could find value as the rest of the pro basketball schedule plays out.

The Warriors’ dominance is pretty much ruining the NBA futures market, with no one wanting to bet against Golden State and no one wanting to lay almost -300 to wager on the Dubs. If you’re looking for the best way to wager on the Warriors to win the NBA title, wait until this team hits a skid. We’ve seen Golden State sputter at times the past two years as it loses focus and looks ahead to the postseason, and these chalky futures odds should trim a bit – giving you a little extra value on the NBA’s best team.

If any team can give the Warriors a run in a four-game series, it’s the Rockets. Maybe. Houston has already defeated the reigning NBA champs this season and has the star power to match the Dubs’ deep roster. Houston will need to turn up the intensity on defense if it wants to really have a chance. The Rockets are allowing 106.1 points per game and have pretty much given foes clean looks at the hoop. The health of James Harden and Chris Paul should also be considered as we’ve seen both players miss time in 2017-18.

The only reason Cleveland is the first choice out of the East is LeBron James. The Cavaliers have some serious locker room issues and injury troubles, and it looks like Isaiah Thomas could do more damage than good. LeBron has two choices: put the Cavs on his back again or let the ship sink. The second option would allow James to bail for big free-agent money in the offseason without much recoil from basketball fans. That should have many NBA bettors looking for futures action elsewhere in the East.

Why the Celtics are behind the Cavs in the NBA futures is a mystery. Boston boasts a ton of talent, and just added some frontcourt depth with the addition of Greg Monroe. There is some uncertainty around the durability of this team, with Gordon Hayward already out, Kyrie Irving missing time, and the bench not contributing much. You could see head coach Brad Stevens taking his foot off the gas in the second half of the season, giving his team a rest and looking ahead to the playoffs. And with that let-up could come more value on this Celtics squad.

The Raptors have some very good players, like DeMar DeRozan and Kyle Lowry, but lack the real superstar needed to carry the team in the postseason. If you look at the teams above Toronto on the futures board, they all have at least bonafied elite-level standout. The Raptors are playing very good basketball right now, but are doing so in the East. If they flipped conferences, this Toronto team would be fighting to make the Top 8 in the West.

This is the big “what if” when it comes to the NBA right now. The Thunder have three All-Stars in Russell Westbrook, Carmelo Anthony, and Paul George and have just started to settle in after some growing pains early in the year. Beyond the starting five, there’s not much to like about OKC, but if this team can make moves before the postseason and bolster its roster and continue to grow, it’s more than capable of knocking Houston out of the playoffs and earning the right to lose to Golden State in the conference finals.