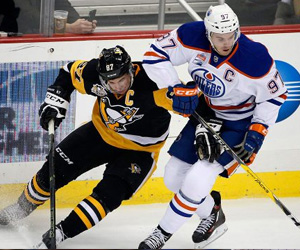 The NHL futures market is unlike most major sports. Due to the volatility of the NHL playoffs, which often features lower-seeded teams upsetting higher ones, hockey bettors can find good value in the Stanley Cup winner sports bet odds pretty much all year.
The best value comes with spotting teams peaking just before the postseason. Last year, Nashville got hot and rode that wave to the Western Conference title. The year before, the Pittsburgh Penguins went on a second-half surge and that carried them to the Cup.
So which NHL teams look to be playing their best hockey at the right time? Here’s a look at some streaking clubs and their odds to hoist Lord Stanley:
Florida Panthers (+8,000)
The Panthers aren’t officially in the postseason yet, sitting a few points back of a wild card spot in the Eastern Conference. Florida has won seven of its last 10 games while collecting points in eight of those matchups and is a red-hot 17-6 since the start of February.
Defense has been the Panthers’ calling card during this streak, giving up three or more goals in only 10 of those past 23 outings. On offense, Florida can find the back of the net, averaging three goals per game, and it has been stellar on home ice with only 11 regulation losses in front of the Sunshine State faithful.
Columbus Blue Jackets (+2,000)
The Blue Jackets are the No. 3 seed in the Metropolitan Division and could improve their standing before the regular season runs out. Columbus has won nine of its last 10 contests and has an offensive power surge to thank. The team is scoring an average of 4.2 goals over those nine victories – a significant uptick from their season-long production of 2.8 goals a night.
The Blue Jackets are one of the better defensive clubs in hockey, allowing just 2.7 goals against – 10th in the NHL – but have an inconsistent option between the pipes in Sergei Bobrovsky. Columbus also isn’t great on special teams, with a lackluster power play and a penalty kill unit only getting the job done 77 percent of the time. That said, if the scoring attack can continue to light the lamp, it might not matter how many goals the Jackets allow.
San Jose Sharks (+2,500)
It was just two years ago that the Sharks were in the Cup final, winning the Western Conference. San Jose has bounced around near the top of the conference this season, and currently sits second in the Pacific Division thanks to an 8-2 hot streak. The Sharks have been especially lively in the last five game, scoring a total of 27 goals in that 5-0 run.
This late-season spark does coincide with the addition of winger Evander Kane during the trade deadline, with the former Sabres star totaling 10 points in his first 10 games for San Jose. The Sharks do have injuries to some key forwards and defensemen but if they can get those bodies healthy, they could take a big bite out of a top-seeded squad in the Stanley Cup playoffs.
Anaheim Ducks (+2,200)
Staying on the West Coast, the Ducks are another team making a large charge toward the playoffs. Anaheim is 7-3 in its last 10 contests and 11-5 in its last 16 games overall. That has the Ducks hot on the heels of the Sharks in the Pacific Division and fending off the rival L.A. Kings for that spot in the standings.
Anaheim is the fourth-ranked defense in the NHL, allowing only 2.6 goals a night, and is getting stellar goaltending from John Gibson, who has three shutouts in his last 10 starts between the pipes. The Ducks are hoping to return veteran blueliner Kevin Bieksa in time for the playoffs and give star defenseman Josh Manson time to heal from an upper-body injury that held him out of action recently.