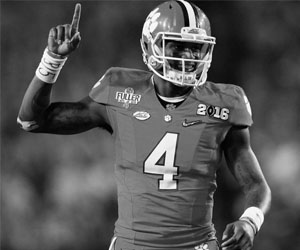 Week 6 of the NCAA football season may have upended the College Football Playoff hopes of a few programs, including the Oklahoma Sooners who were stunned by Iowa State, and the Michigan Wolverines who were defeated by rival Michigan State.
So, now that we enter Week 7 of the college football betting season, what do the CFP title futures look like? Here’s a sports handicapping article togive a glance at the newest National Championship Odds and the top contenders for the title:
Alabama Crimson Tide (+130)
The Mighty Crimson Tide are on the war path after losing in last year’s title game. Outside of a Week 1 matchup with Florida State, Alabama faced its toughest foe to date at Texas A&M Saturday. It scrapped to a 27-19 win – much closer than the 25-point spread indicated.
The Tide haven’t been overwhelmingly dominant like past seasons, and likely won’t have to be until the Iron Bowl against Auburn in the last game of the season. Alabama plays three in a row, starting with Arkansas this week, followed by Tennessee and LSU – which would normally look like a challenge. However, those SEC heavyweights have stumbled and don’t appear to be too much of a speed bump for Nick Saban’s kids.
Clemson Tigers (+450)
The buzz has started for Clemson vs. Alabama Round 3 after the Tigers opened the season undefeated and with little resistance in the ACC. Much like the Crimson Tide, Clemson hasn’t been dominant and found itself in a bit of a fight with Wake Forest Saturday.
Quarterback Kelly Bryant is putting this hat in the Heisman ring, leading the team in passing, rushing and touchdowns scored. He’s had the big shoes of DeShaun Watson to fill, and through six weeks he’s done so. But the real reason why Clemson could go back-to-back in the national title game is the defense. The Tigers stop unit has allowed just over 264 yards and only 11.3 points per game heading into Saturday’s road trip to Syracuse.
Ohio State Buckeyes (+750)
Is Ohio State primed for a playoff appearance? Are the Buckeyes even the best team in the Big Ten? We’ll find out when OSU takes on Penn State in Week 9. Ohio State is coming off a one-sided win over Maryland, putting up 62 last Saturday. In fact, the Buckeyes have lit up the scoreboard for a grand total of 172 points over their last three games. Urban Meyer is trying to leave little doubt in the eyes of the CFP rankings committee.
Ohio State does have a challenge going to Lincoln to play the Cornhuskers in Week 7 – as much of a challenge as a 24-point spread can be. The Buckeyes then have a bye week before the PSU game. Following that, Ohio State goes on the road to play a tough Iowa team, then hosts Michigan State and Illinois before traveling to rival Michigan in the final week of the season.
Penn State Nittany Lions (+1,000)
The Nittany Lions have the luxury of owning the best player in the country in running back Saquon Barkley, who has scrambled to the top of the Heisman odds with 649 rushing yards and nine touchdowns. He’s anchoring a Penn State offense that’s posting nearly 40 points per game.
The Nittany Lions have yet to really face a tough test – outside of a close game in Iowa – and don’t have much ahead of them on the calendar besides that aforementioned showdown with Ohio State in Columbus in Week 9. Should PSU win that game, it should be clear sailing into the Big Ten title game in a likely matchup with Wisconsin.