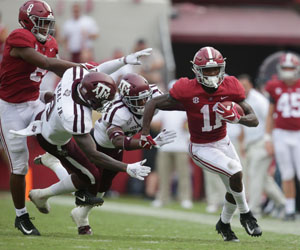 The college football schedule hits a high in Week 7, with a surplus of marquee matchups on the board. One of those big-name games takes place in the SEC, when the Alabama Crimson Tide take on the Texas A&M Aggies Saturday.

Top handicappers have the Crimson Tide set as 13-point favorites on the road in College Station, having gone 5-0 SU to start the year but covering the spread in only two of those games. The Tide and Aggies have heated history, with Texas A&M covering in four of their seven meetings since moving to the SEC.

If you’re betting on the odds for Alabama and Texas A&M, here are the best angles and edges to look for.

Slower starts
Alabama was known for its first-half dominance in 2018 but hasn’t had that same success in the early minutes of its 2019 campaign.

The Tide average 11.2 points per first quarter – a drop from the 16.1 points scored on average in the opening 15 minutes last year. Defensively, Alabama is allowing four points against in that span, for an average lead of only 7.2 points in the opening frame.

Second quarters, however, have been a different story. The Tide are scoring 17.2 second-quarter points on the year while giving up just two points against in that 15-minute frame.

Bama blew away Mississippi 31-0 in the second quarter of its last game (Week 5) and owned a 31-13 lead over the Aggies at half of last year’s game at Bryant-Denny Stadium.

Texas-sized troubles
The Aggies offense has sputtered a bit to start SEC play. Texas A&M, which normally ranks among the country’s elite in terms of scoring, put up only 20 points in a loss to Auburn in Week 4 and scored 31 points in a road win over Arkansas in Week 5 before getting a bye this past weekend.

Some of those scoring issues are rooted in the offensive line, which has struggle to protect quarterback Kellen Mond. Texas A&M has allowed 10 sacks on the season and hasn’t been able to create space for the rushing game.

Aggies running back Isaiah Spiller is picking up more carries after the team lost Jashaun Corbin in the second game of the season. The true freshman rusher started strong against weaker defenses but has run into a wall the past two weeks, totaling just nine yards on 13 carries.

Alabama is allowing 135 yards on the ground per game, which could be the glaring weakness for this usually stout stop unit. The Crimson Tide gave up 135 yards to South Carolina and 280 to Ole Miss, but may not have to fear the Aggies’ ground game with Texas A&M having troubles establishing the run.

Tua Time
Alabama quarterback and Heisman frontrunner Tua Tagovailoa is pacing the nation’s third-best passing game, averaging almost 381 yards through the air per outing. Last year, Tua went 22 for 30 for 387 yards passing and four touchdowns in a 45-23 win over the Aggies.

Texas A&M has the 31st-ranked pass defense in the FBS, allowing opponents to throw for an average of only 191.4 yards per game. It did a good job limiting Clemson’s Trevor Lawrence in their early-season showdown, giving up just 268 yards with one passing touchdown and one interception.

The Aggies give up just 5.6 yards per attempt and have six interceptions on the season. Tagovailoa has 23 touchdowns passes without a single interception so far in 2019.