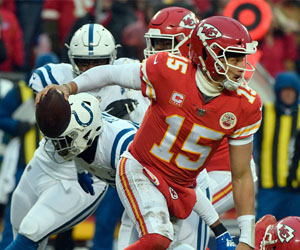 This Sunday’s showdown between the Indianapolis Colts and Kansas City Chiefs was supposed to be a classic matchup of quarterbacks, pushing their teams to the top of the AFC standings. However, with the sudden resignation of Andrew Luck, this matchup may have lost a little luster.

Top handicappers opened the Chiefs as 9.5-point chalk at home on Sunday night and that has drawn one-sided money on Kansas City, pushing the line as high as -10.5. The total for this primetime game opened at 55.5 points and has since climbed to 56.5.

If you’re betting on the Sunday Night Football NFL odds, here are the best betting angles for Colts at Chiefs:

Close call
Kansas City kept its perfect 4-0 record alive with a close win at Detroit last Sunday. It was an ugly game for the Chiefs, who coughed the ball up three times on fumbles and looked out of sync in the passing game. Patrick Mahomes finished with 315 yards through the air but completed only 24 of 42 attempts and failed to connect for a touchdown in the 34-30 victory.

It was the team’s third road game in four weeks and injuries to the offense slowed down one of the NFL’s premier attacks. Last season, the Chiefs thrived inside of Arrowhead Stadium, averaging 32.1 points per home game while allowing just 19.4 points against – an average margin of victory of almost 13 points per game as hosts.

So far in 2019, Kansas City has a 33-28 win over the Baltimore Ravens at home. The Chiefs held a 30-13 lead over the Ravens in the third quarter before surrendering a 17-3 run to Baltimore but managed to cover as 4.5-point home chalk.

Horse power
The Colts looked solid entering Week 4 with a 2-1 mark and that lone loss coming in overtime in Week 1. However, Indianapolis got stung early into their home date with the Oakland Raiders and couldn’t battle back, losing 31-24 as 5.5-point home favorite.

Indianapolis has benefited from big leads early into games so far in 2019, edging the L.A. Chargers 17-6 before losing the opener and taking control of the Atlanta Falcons 20-3 in Week 3, which has made it easier to defend those opponents.

Against the Chiefs, the Colts can’t run the risk of falling behind. Indianapolis quarterback Jacoby Brissett has filled in for the No. 1 spot admirably but is far from the deep threat that Luck poised. The Colts offense has been primarily short passes and plenty of runs, but injuries to their top skill players could hurt them in this matchup.

Running back Marlon Mack left Week 4 with an ankle injury and No. 1 receiver TY Hilton missed last Sunday while recovering from a quads injury. Indianapolis will need Mack to control the ball and the clock – keeping a KC scoring attack of the field – and will depend on Hilton to strike big if they trail on the scoreboard.