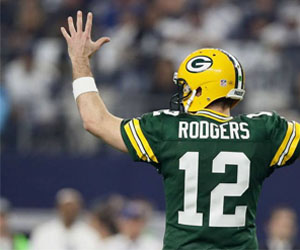 The 2018 NFL schedule still has that new car smell and upon the release of the September-to-December calendar comes a slew of NFL futures odds, including which top NFLer will take home Most Valuable Player honors.
Here’s a look by our top handicappers at a few betting favorites, as well as live long shots to win the 2018 NFL MVP award:
Tom Brady, New England Patriots (+500)
Tom Brady has shown no signs of slowing down. The Patriots passer is coming off his third MVP campaign in 2017 and shattered passing records in a loss in the Super Bowl. New England is once again expected to win the AFC and is the oddsmakers’ pick to hoist the Lombardi Trophy. Last season, Brady passed for 4,577 yards – his fourth biggest passing year ever – and connected for 32 touchdowns. Now, there were times when No. 12 looked human and was obviously hobbled by an Achilles injury. Will 2018 finally be the year when Father Time catches up with Brady?
Aaron Rodgers, Green Bay Packers (+550)
Rodgers is another QB that, when healthy, is a surefire MVP contender. But health has evaded the Packers’ top passer in recent years, and he missed a good chunk of 2017 with a broken collarbone. Green Bay is no longer the team to beat in the NFC North and if the Cheeseheads are going to edge the Vikings in the division, it will all be due to Rodgers’ incredible play in the pocket.
Carson Wentz, Philadelphia Eagles (+800)
This was Wentz’s award to lose last season, after the second-year man led Philadelphia to the top of the NFC. However, a late-season knee injury not only sidelined Wentz for the Eagles’ entire Super Bowl run but also snuffed out any shot of him winning MVP. Wentz is hoping to be back in action by Week 1 and has the team around him and the skill set to close the deal on a MVP campaign.
Deshaun Watson, Houston Texans (+3,000)
Second-year quarterbacks were the talk of the 2017 season, with Wentz and Jared Goff taking their teams to the postseason. Maybe Houston can get a MVP year from their second-year man out of Clemson? Watson looked fantastic in limited work last year before an injury in practice ended the Texans’ run. Watson’s status for Week 1 is a little blurry at this point but the team has some great weapons around him and showed a dependence on him under center before and after his six games as Houston’s starter.
Ezekiel Elliot, Dallas Cowboys (+4,000)
Quarterbacks have won five straight MVP awards and 10 of the previous 11, with the only exception being former Vikings running back Adrian Peterson in 2012. Elliott has the chops to earn top individual honors as the beating heart of the Dallas offense. Elliott rushed for 983 yards and seven touchdowns in 2017, despite playing only 10 games due to suspension. With a full year – and without the shadow of suspension hovering over him – the Cowboys could ride Zeke all the way the postseason.
Derek Carr, Oakland Raiders (+5,000)
Carr nearly walked away with the MVP award two years ago after leading the Raiders to 12 wins before suffering a broken fibula. Oakland’s offense took a huge step back in 2017, lacking true deep-strike abilities, but brought in former head coach Jon Gruden to shoot the franchise full of energy before shipping off for Sin City in two more years. Carr is an amazing talent and has Jordy Nelson and Amari Cooper as targets this season. The AFC West is very much up for grabs, with no standout team, and if Carr can get the Silver and Black back to the playoffs, he could earn MVP honors along with it.